To strengthen the maternal health services in the country government has taken various steps such as fix day services, care to pregnant women identified with some kind of risks, cash incentives and free transport facility for childbirth in the health facility, mandatory stay for 48 hours at the institution etc.
Centre for Health and Social Justice (CHSJ) and National Alliance for Maternal Health and Human Rights (NAMHHR) in collaboration with state networks in five states [Health Watch Forum in Bihar, Jharkhand Women's Health Network, Dalit Human Rights Forum-Karnataka (KR), Maternal Health Rights Campaign, Madhya Pradesh (MP), Health Watch Forum- Uttar Pradesh(UP)] carried out community based monitoring (CBM) of maternal health services in 2019.  The CBM tools were developed based on the health services entitlements promised under the programs and as per the Indian Public Health Standards. Real time data was collected using mobile application namely 'Swasthya Darpan'. Women who had childbirth in last six months were interviewed for their childbirth experience;  Village level fixed day services and Primary Health institutions were observed for the status of maternal health services. Please see following table for the details:

VHSND, a monthly designated day in the village for carrying out various health related activities among which one of them is providing maternal health services to pregnant and lactating women. It is envisaged to be an inclusive and comprehensive space for catering to pregnant women’s care by administering a range of services. A VHSND is successful when it fulfils its objectives to ensure that women are given timely services with utmost care. However in the current scenario the story is otherwise. The CBM activity looked into three aspects of the VHSND namely human resource, infrastructure and services administered. Each of these categories had a range of relevant components that needed to be available for better functioning in the given domains. Each of the observed components then weregiven a score of 1 if available or as required by IPHS standards and 0 if not available. The scores were then converted into scores cards in the specific domains. The status of the VHSND in the various states is as follows: 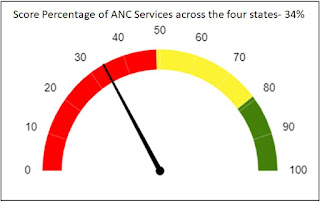 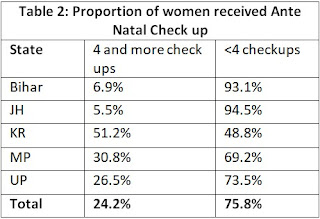 Status of services provided during ANC:


Place of delivery
As a result of consistent and multidimensional approach of the government significant no. of births have happened in an institution- around 69% in a government facility and around 14.2% in a private facility. Of all the births taken place, around 15% took place at home; few births took place while on the way to institution. 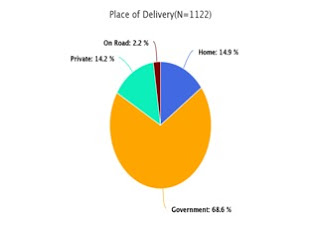 Experience in the Labour Room
Although govt. Encouraged women to come to the health institution for the childbirth but still Privacy, respect and dignity for the woman in child birth to get there yet seems to be a remote dream as seen in the table below:
Out of pocket Expenses 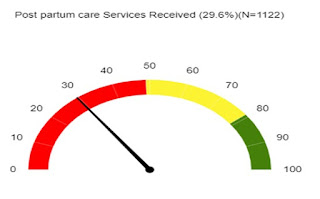 A comprehensive maternal care is not complete without providing care after the childbirth. Many women die post child birth or develop some kind of complications. Even though health workers are supposed to make regular visits to the woman’s house, we see that the situation is in an unsatisfactory state.


Overall situation throws challenges to address the grey areas like continuity of care, quality ANC and PNC, Care with respect and dignity and free childbirth services and timely receipt of the maternity entitlements promised under various schemes and programs. To achieve the sustainable Development Goal (#3) it is important to ensure the continuum of care and quality maternal health services.
Posted by NAMHHR No comments: