The Rashtriya Garima Abhiyan initiated a march “Maila Mukti Yatra” (National Peoples March for Total Eradication of Manual Scavenging) beginning from Bhopal on November 30, 2012 and culminated in New Delhi on 31st January 2013 with the resolution -“The slavery of manual scavenging is against dignity,humanity and human rights. We will eradicate this slavery anyhow.” Covering over 10,000 kilometres through 200 districts of 18 states The March successfully mobilized 50,000 manual scavengers to stop the practice.

In the concluding ceremony held in New Delhi, thousands of Dalit women who had stopped working as manual scavengers took a firm decision to bring an end to this practice. Ministers from the Ministry of Social Justice and Empowerment, Ministry of Rural Development, Ministry of Women and Child Development and a representative from the Planning Commission of India expressed their commitment towards passing a new legislation and announced several provisions for rehabilitation at the ceremony. Country representatives of the UNFPA, ILO, and the United Nations also committed to work towards eradicating the practice of manual scavenging.

The event was also successful in bringing together chairpersons of the National Commission for Safai Karmcharis and the Dalit India Chamber of Commerce and Industries who stressed on the importance of rehabilitation and skill development to enable manual scavengers undertake alternate sources of employment.

Civil society showed strong support to the cause by ensuring their presence in large numbers at the event. Representatives from the Association for Voluntary Action, Dalit Alliance, Andhra Pradesh; Jai Bharat, Andhra Pradesh; Navsarjan Trust, Gujarat; Ahil Bharti Safai Majdur Sangh, Jharkhand and NAMHHR expressed their solidarity. Former member of the National Advisory Council, Mr. Harsh Mander, said “No human is born to perform the act of scavenging and getting forced to adopt it as a profession. Women associated with the Rashtriya Garima Abhiyan have shown the courage of changing this complex social system, and this courage will activate the process of social transformation.” 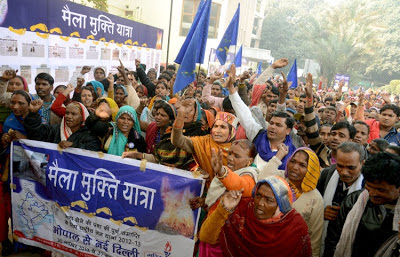 The past 25 years of the safe motherhood movement has seen extraordinary successes - notably a 33% reduction in maternal mortality from 409,053 in 1990 to 273,465 in 2011. However as 2015 draws closer and it is clear that many countries will be unable to achieve the Millennium Development Goals, the question that is being raised is how will the gains of the past be protected and how can unfinished business be addressed? As a contribution to the process of redefining human development for women after 2015, the Maternal Health Task Force held a conference in Arusha on improving the quality of maternal health care.

Co-organized by Management and Development for Health, and sponsored by the Bill and Melinda Gates Foundation, the MacArthur Foundation, UNICEF, and UNFPA the Global Maternal Health Conference brought together over 800 experts in maternal health in Arusha, Tanzania. The three day conference (15-17th Jan 2013) was marked with rich discussion and a sharing of the latest evidence on improving the quality of care for women during pregnancy and childbirth.

NAMHHR convener was invited by WHO to present in a session entitled “Maternal death surveillance and response for better quality of maternal health care”. Drawing on the learnings from our National Advocacy Seminar on maternal death reviews “Chronicles of Deaths Foretold”. Jashodhara highlighted the role of civil society organizations in maternal death review. She mentioned that civil society organizations (CSO) in India were complimenting the government’s efforts by incorporating additional perspectives to maternal death reviews (MDRs) related to social determinants of health, non-obstetric causes of death, entitlements, continuum of care, discrimination/denial . The analysis by CSO differed from that done by the government, in that it is done within a framework of rights and accountability rather than a technical largely bio-medical investigation. She also mentioned that CSOs have the advantage of being able to obtain information from community members in a more non-threatening manner that a government representative. Further in the context of South Asian countries where maternal mortality was high, especially among most vulnerable socio-economic groups, a few crucial questions pertained to who does the MDR (government representative/CSO), why it is undertaking (fault finding/fact finding), what is investigated (only bio-medical causes of death vs health system lapses and socio economic factors), who gives data (providers/women’s family), how is the data processed (all deaths reviewed/sample of deaths in selected sites aimed at promoting learning) and how is the analysis used (is it made public and feed back for system improvement and promoting accountability). Jashodhara mentioned that in India CSOs were in dialogue with the Ministry of Health and Family Welfare to ensure their representation on state committees. CSOs were also pushing for accountability by addressing parliamentarians and National Human Rights Commission on this.