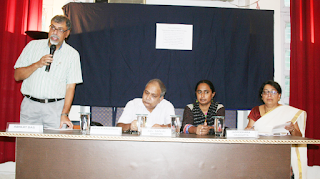 ​A national alliance of organisations working on maternal health rights today called for setting up of an independent monitoring commission to look at the audits and reports that are commissioned by the government to review its family planning programme.  An oversight body of parliamentarians, women's rights organisations and academicians needs to be constituted immediately, said Jashodhara Dasgupta of HealthWatch Forum U.P, adding that such measures would support Wednesday's landmark Supreme Court order in the case of Devika Biswas vs Union of India and others (Writ petition (Civil) No.95 of 2012), that ruled against mass sterilisation camps and called for greater transparency in the family planning programme. Dasgupta said, speaking at a press conference organised in New Delhi today by the National Alliance for Maternal Health and Human Rights (NAMHHR) and HRLN through whom the petition had been filed, activists from across the country and public health experts welcomed the judgement as an important step towards reproductive health justice for women in India.


Petitioner Devika Biswas  appreciated the order acknowledging the government’s failure  opining at the same time that mass sterilisation camps should be stopped immediately rather than being given a buffer period of three years. She felt government accountability needed to be emphasised through ensuring redressal and compensation for the women who had suffered, which was currently lacking.  "Civil society and media now need to vigilantly monitor the implementation of the SC order by informing communities that the practice is soon to be banned," said Biswas.

"Government accountability needed to be emphasised through ensuring redressal and compensation for the women who had suffered, which was currently lacking.  "Civil society and media now need to vigilantly monitor the implementation of the SC order by informing communities that the practice is soon to be banned."          - DEVIKA BISWAS

Kavita Krishnan, Secretary AIPWA expressed concern at the press conference that the issue was still being framed as  a population control problem rather than a question of reproductive justice for all women. She emphasized,"The question is not about which is the next best technological fix in contraception but about what actions will empower women to gain control over their bodies, and encourage men to take responsibility for contraception."


Described as the single largest operation ever to take place anywhere in the world, equivalent only to the cataract eye surgeries, about 4-5 million women in India undergo sterilisations each year, and the estimate is that close to 1000 women die every year due to the appalling conditions in which sterilisations are carried out by public health system.“The family planning program in India adopted a mass surgery approach in the 1970’s in Ernakulam, Kerala, where men underwent vasectomy by the hundreds. This same approach was applied, however, to the more complicated procedure of female sterilization which involved an abdominal operation, a grossly inappropriate move in hindsight,” said  Abhijit Das, Convener of  NAMHHR.


Sanjai Sharma of HRLN recounted the long struggle of over two decades to highlight concerns about quality of care in sterilization camps. Specifically he referred to the Ramakant Rai v Union of India case, which the present judgment refers to and expressed surprise that the Supreme Court orders in that case from 2005 have not been implemented as yet on the ground.


Ajay Lal of the Maternal Health Rights Campaign in Madhya Pradesh spoke about the  conditions prevailing insterilization camps in the state. He related observations from 28 camps in 12 districts of M.P in 2016, describing that even now camps were  being held in unsanitary conditions in dharamshalas and schools apart from public health centres, and cycle pumps were being used to pump air into the abdomen, a gross violation of standard operating procedures. Rajdev Chaturvedi  from Healthwatch, Uttar Pradesh who is also a member of the quality assurance committee (QAC) in the district of Azamgarh, said that the committee was constituted three years ago but no meeting has been held. He also spoke of emerging issues related to family planning, especially that of fraudulent records of post-partum IUCDs and stealth insertion of IUCDs without women’s knowledge after delivery. From Chhattisgarh Dr Yogesh Jain  ofJan Swasthya Sahayog provided his observations following the Bilaspur incident where 13 women died after sterilization operations in 2014. He mentioned that the Anita Jha commission report which inquired into the matter had not inspired any confidence as it merely shifted the blame onto an external party – the drug manufacturer – even though evidence pointed to the contrary. In response to the case, the public health facilities had altogether stopped conducting sterilization camps and now women who needed the procedure had to go to neighbouring states or pay a private provider to avail of these services. This is an unintended consequence of the issue and ultimately ends up harming women.


The press conference ended with a call to use this judgment as an impetus to launch a larger public movement against  the 'violation of women's bodily rights' by  highlighting  concerns around the implementation of the family planning program with regard to quality of care and informed choice and maintaining pressure on the government for greater accountability.